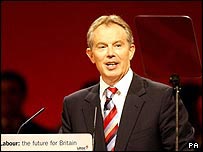 The news is full of Tony Blair’s speech to the Labour conference as he moves forward in the process of stepping down as Prime Minister. I’m struck by how happy and positive these reports are; normally the media seems to go straight from gossipping about how bad it is that someone is staying in office to how bad it is that they are leaving but maybe the country is breathing a sigh of relief? Whatever the balance of good and bad under his leadership, I certainly feel that handing the reins on is long overdue.

However, I couldn’t help puzzling about the tie he was wearing in the pictures. Surely that is not a “Stars ‘n’ Stripes” design? It is probably just a clip-on microphone or something similar. I can hardly believe that a leader who has often been criticised for being too much in tow to the whims of Washington would choose (or be allowed to) make such a crucial speech in his career dressed in patriotic American colours!

I will be keeping an eye out for further pictures to make the situation clear. I know plenty of wonderful Americans but don’t want the UK to become the 51st state! If Gordon Brown gets up in a full Uncle Sam rig, I will definitely have to think about emigrating!

Want to add something? Click on the picture to add a comment and join the conversation about this posting.