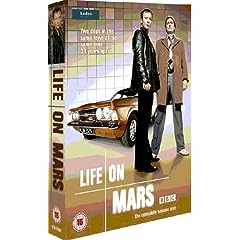 Jane and I have recently discovered Life on Mars. That is to say, we have started watching the TV series about a policeman who finds himself flung back in time to 1973 rather than meeting little green men from the red planet! We saw a promo disk with the first two episodes, which we enjoyed so much that we picked up the first series on DVD last Saturday.

I have done a little background reading on the series, although I have so far resisted using the ‘net to find out what happened in the final episode, broadcast last night. One of the sites I have come across is the official BBC Life on Mars website. This is very informative, giving a synopsis of each episode along with video clips and a more detailed summary for those that want it.

The highlight for me, though, is the music information for each programme. The backing track is an important element in the early 70’s ambiance and the list (such as this one for season 1, episode 5, which we watched last night) makes fascinating follow-up material both to confirm the tracks I recognised and to pin down the ones I vaguely knew or had no idea about but might want to hear again.