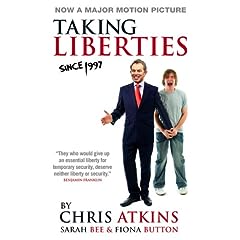 I went to my first ever film premiere last night for a preview showing of Taking Liberties at Amnesty International’s London base. It is a documentary focusing on how recent UK government legislation threatens freedoms that have long been held, preventing peaceful protests and detaining people without charge.

The film officially opens in early June and an entry can be found on IMDB. There is also a related book already available (linked via the picture) and, of course, a website for the project.

It is a different type of film from V for Vendetta, which I reviewed last year but carries a similar message. If anything, it is more shocking because much of Taking Liberties is created from news footage that is already familiar from TV screens and the interviews are not with scripted characters but people who live in the public eye.

The note of hope is that we still live in a society where a film like this can be made and publicised without those involved being branded as subversives and made to quietly disappear. The human rights situation in the UK is not nearly as appalling as that which many nations suffer under. However, there has been a loss of some liberties and actions have been carried out that political leaders would doubtless condemn if they observed being carried out by those in their “axis of evil”.

I hope this film is widely watched, rather than lost among the trite entertainment of summer blockbusters, and responded to with appropriate action to prove that the UK does remain a bastion of democracy and liberty – watch out for the general release date.