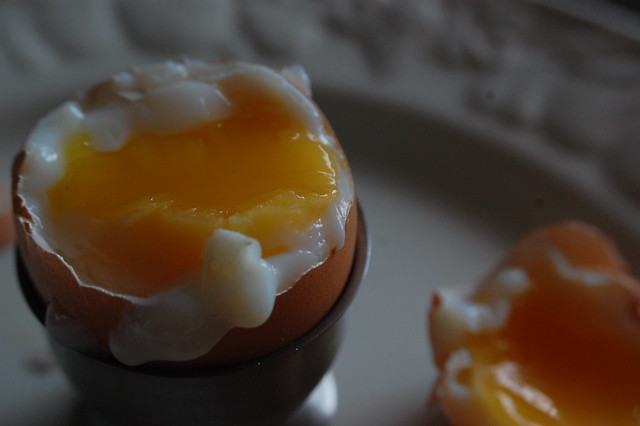 Did you think I could resist playing with my new toy — the Codlo temperature controller that arrived yesterday — any longer? Of course not. I decided to try the 13 minute egg method from Serious Eats, who did a whole article about sous vide style eggs a year or so ago. The article explained that time as well as temperature can be shown to make a difference to how the eggs turn out and then gave the idea of cooking an egg at 75°C for thirteen minutes. If you left the egg in for an hour, it would be overcooked but because it takes some time for the temperature gradient to equalise across the egg, you end up with a white that isn’t too runny and a yolk that is setting but not hard. It also means you don’t have to wait an hour or more to have breakfast!

I did discover a certain flaw in my plan. Even now, well over an hour after starting, my slow cooker hasn’t quite managed to pass the 70°C barrier. How did I get my egg cooked then? I cheated, using a separate pan on my induction hob to provide the heat and using the Codlo just to give me feedback on time and temperature on its large display. It was still plugged into the slow cooker and didn’t, of course, realise that the heating was being controlled elsewhere. At least the slow cooker will be hot enough for most other things I want to cook but I could put up with the hassle of keeping an eye on things for thirteen minutes (and it also means you can try the recipe if you have a decent thermometer and a timer).

I did find that I’d apply some heat, turn off the hob and the temperature would still rise another couple of degrees before falling back towards the target so I was worried that the eggs would be overdone. However, the final result was all I hoped for. Cooked whites and yolks that were voluptuously silky. I will definitely be making those again, even though I will have to give some more thought to whether I can do it in a set and forget way (perhaps starting with hotter water from the kettle and then using the Codlo to arrest the descent the temperature once it hits the level needed to ensure the yolks properly set?). More experiments to come but a good start.