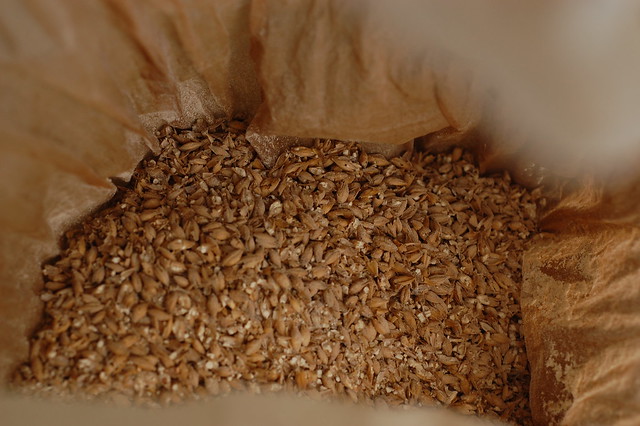 That is the grist, the crushed malt grains, from this weekend’s homebrew which I am calling Marjoram Spring. It is roughly based on the recipe for Exe Valley Spring Beer from Graham Wheeler’s Brew Your Own British Real Ale but with a number of tweaks. Firstly, as per normal, it is scaled down to fit my equipment. Actually, in this case the scaling was also imposed by the available ingredients. This uses up the last of both my pale and mild malt supplies (Wheeler’s recipe calls only for pale malt) and I adjusted everything else around the 800g combined weight of the grist.

There was another major twist in that I replaced the recommended post-boil addition of Styrian Golding hops with about 2l of juice extracted from a marjoram plant that I gave a substantial trim back last weekend. I had boiled them with water, filtered off the resulting liquor and kept in the fridge. To make it ready for use, I added light dried malt extract to hit a gravity of about 1.040 and added it to the wort, pre-heated, 15 minutes before the end of the boil.

The wort was then transferred to a plastic jerry can to cool overnight. The next morning I measured the gravity as about 1.048 and decided to dilute it down a bit as the volume was fairly small. I added 1.5l of water and slightly overshot the target, passing 1.042 and landing up at 1.038. It is now bubbling away with some Mangrove Jack’s Burton Union yeast (my attempts to harvest yeast from a bottle of Worthington’s White Shield seem to have failed).

It won’t be anything like the original recipe but I’m hopeful that it will turn out to be a drinkable — and quite unique — beer that will be ideal for enjoying mid-May and beyond.