I might as well complete the set. Here is what I call the Herb Hexagon from a couple of weeks ago: 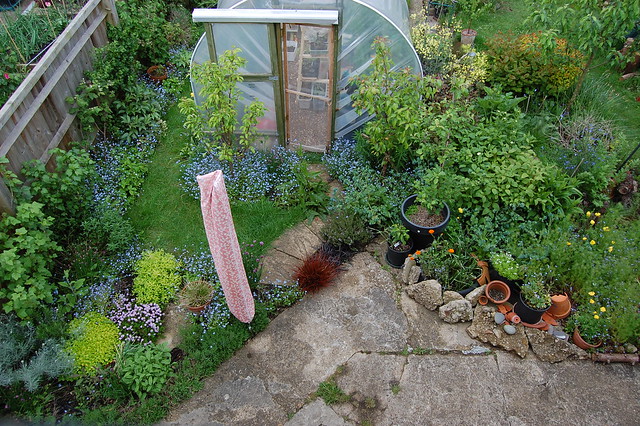 The hexagonal slab from which it is named is somewhat lost under that spray of purple-flowered thyme near the bottom left of the frame. From this view, I am particularly pleased with the two pear trees which flank the front of the polytunnel (Pyrus communis ‘Onward’ on the left and Pyrus communis ‘Humbug’ on the right). We have had both since 2011 and both have had seasons where they really seemed to be ailing (Humbug first and Onward the following year) but both now seem very healthy.

In terms of produce, the Humbug one has probably paid for itself (more so if you price the unusually patterned pears at a premium rather than regular price); Onward has been less productive so far but the post-blossom indications are that it will come into its own this season. It might be a few more years though before I finally achieve the arched entrance to the polytunnel that I have in mind.