I grow plants for all sorts of reasons and I’m often forebearing towards plants that don’t live up to the promise which inspired me to give the space with the hope of future bounty or in appreciation of their present beauty. However, I have to confess that I’ve given up on Shark’s Fin Melon (Curcubita ficifolia) for this year. 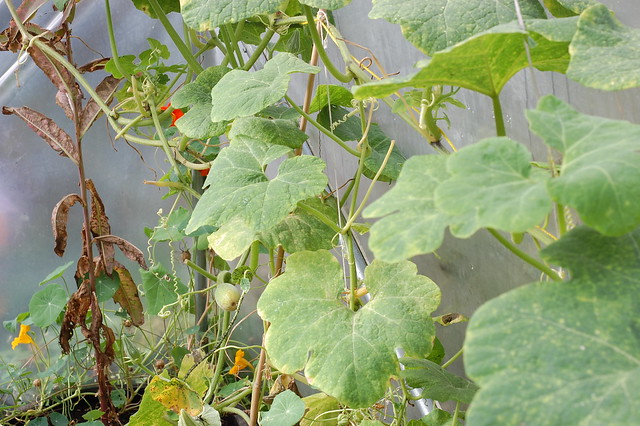 That is a photo from just over a week ago. Rather than the watermelon sized fruit that was expected (like the one we were given last year and from which we harvested the seed), the best we got was less than fist sized, like the one you can see towards the bottom left of the image. Furthermore, we’d leave them to swell and they’d end up going brown and falling off instead. Consequently, it got rooted out yesterday and it’s main contribution has been to the compost heap.

We ended up getting on small fruit off it, which we’ll probably eat tonight. What went wrong? It probably isn’t a plant for a small polytunnel. It required a lot of watering and the state of the ground underneath it suggests maybe we didn’t do enough. We also had to keep cutting it back as it tried to roam too far. Unattended, it could have filled the entire space and probably burst out. I think it didn’t need the extra protection of the polytunnel and would have benefitted from an outside environment. A friend has been growing the plant successfully on his allotment nearby but I think it is too much of a beast for our plot so we won’t be trying this one again.

At least that frees up one of the side beds in the polytunnel, so we can start planting our late season and overwintering crops.