Following on from yesterday’s post about harmonising the two biblical accounts of the Nativity (Matthew 1-2; Luke 1-2), here is my diagram of the two stories side by side: 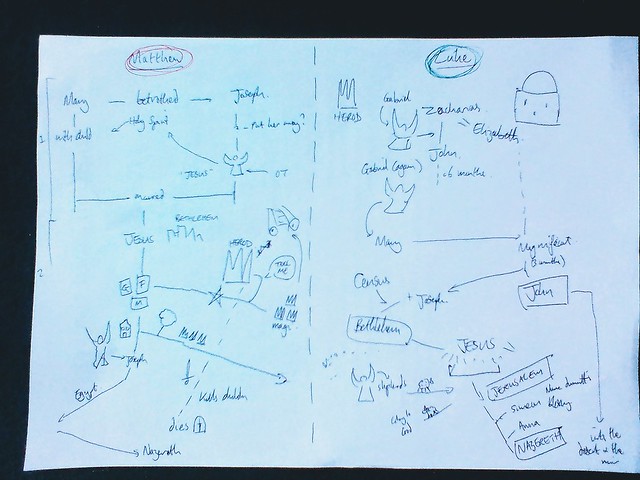 The two stories are actually quite different. A simple way to view it is that Matthew is interested in presenting Jesus as the promised heir of the kingly line of David, while Luke is fascinated by insights into human stories. A significant difference is that Matthew tells how the angel Gabriel spoke to Jesus while Luke ignores that but has Gabriel’s message to Mary (and Mary’s subsequent poetic outburst to Elizabeth).

There are also some things that are missing from the original accounts. It isn’t just robins (which I understand turn up in a lot of modern school plays for the season) but also donkeys. Just because you’ve seen it on the Christmas cards and heard it in the songs doesn’t mean it is in the story. It isn’t an unreasonable supposition that Mary and Joseph had a donkey to help their journey but you have to wait until much later in the gospel stories for that animal to get a role.

Neither are there throngs of angels above the stable (in fact, there is no direct mention of a stable at all – only a manger). Luke has angels appearing to shepherds and what amazes Mary is that these men turn up to worship the child in the middle of the night – there had been no announcement from the family but they knew where and when to come. Meanwhile, it is Matthew who tells the story of the Magi (at least two; we only assume there were three because we are told of their three symbolic gifts).

And, of course, special as this time of year is, Mark and John don’t even mention it (although John does have his glorious prologue in chapter 1, which makes it into many Christmas services). It is fascinating to have these two independent eyewitness accounts but all four gospel writers agree that the key period of Jesus’ life is about thirty or so years later. Perhaps I should try a similar sketching exercise at Easter although there is a lot more material to work through for that story.