Advertising gigs on my blog doesn’t seem a particularly effective way of getting people to come along to my gigs so it probably doesn’t matter that the one that I have in mind started four hours ago, with an ad hoc jazz band performing at Follyfest in Faringdon. It was a decent performance and the event, Faringdon’s annual (and brilliant) free festival brings in its own crowd. What was of particular interest to me was getting to roadtest the new bass amp I bought this week, a Markbass Nano Mark 300: 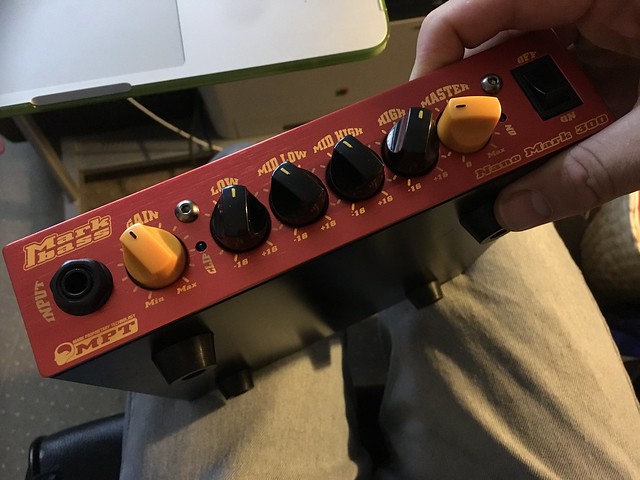 Look at the size of my hand compared to the amp – this thing is tiny. However, small though it is, it also manages to be more than loud enough. Their promise of ‘unbelievable power-to-weight ratio’ really holds up. Through my 8 Ohm cab, it potentially realises up to 150W RMS but the settings are pretty much as I had them on stage and it was more than loud enough. Compared to my old Ashdown ABM 250 head, it is theoretically running at 100W less but is more than ample for my needs. If I added a second cab, taking me down to 4 Ohms (and up to 300W power), I think it would dominate even a large venue; for any gig I’ve done in the past 15 or so years since I got the Ashdown head, it would have been more than ample.

The big advantage is that it is so lightweight. I could just drop this in my shoulder bag rather than having to trundle further weight on the trolley I used for the cabinet. Hurrah for the 20th century, where a bass amp can be small, loud AND affordable (and have a natty red front). Anyone want to buy a cheap Ashdown ABM 250?