In my experience of UK churches, most aren’t packed to bursting and congregants often take a relaxed approach to the matter of start times. This is frustrating if you are leading something due to take place in the first few minutes of the service but it is true that latecomers won’t generally have a problem finding a seat. Not so at Soul Survivor, where the hall started filling up an hour early and, if you wanted to sit together as a group, you needed to get down there before stewards started to make people shuffle up and stop saving places so that everyone could be accommodated. Consequently, at couple of hours each day were spent turning up early to things and then waiting.

This turned out to be the perfect opportunity to do some more blind drawing and I’ve just published my sketches onto Flickr, including this one: 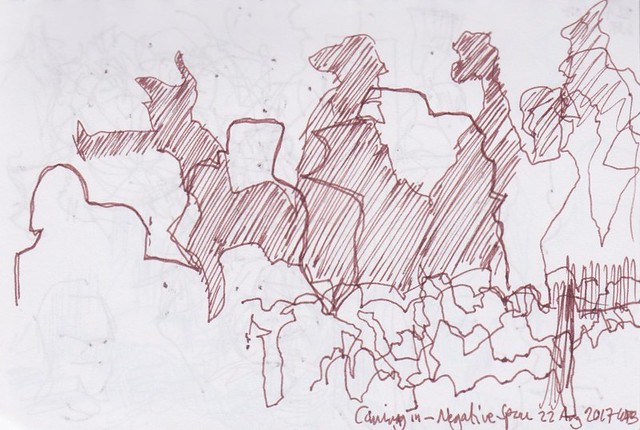 In this exercise, I was concentrating on negative space – the gaps between people rather than the people themselves. I overlaid a number of drawings and added some subsequent shading, so there is an element of intentional design as well as the ‘blind’ exercise of drawing each fresh line without looking down at the page. All these drawing exercises were complicated by the fact that no-one stood still but I was pleased with the energy of some of them.

Although not really a photo, I’m including this one in my ongoing 52photos project as it is about developing how I see as an artist.