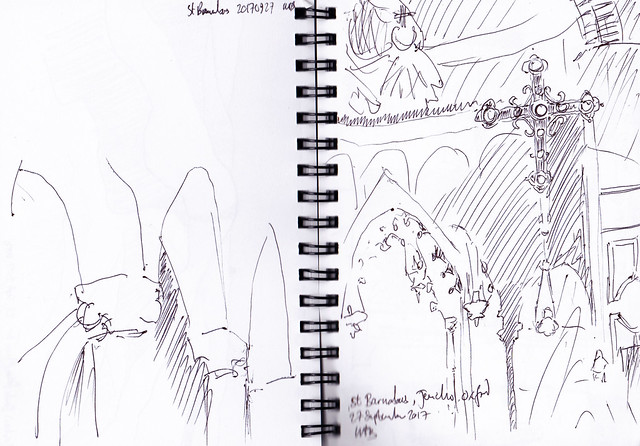 These are two sketches I did last night of the interior of St Barnabas, Jericho, during the joint Cowley and Oxford Deanery Synod. I was paying attention, honest, but it is such a beautiful building so I wanted to give hand and eye some exercise. Two drawings, not one, note. I did the one on the right first, making some effort to observe and retain the proportions of the hanging cross, the lamps in front of the altar and a hint of the picture of Christ in the cupola above the altar.

Then I sketch the second quickly, barely looking at the paper but just trying to capture the bold flow of the arches down the nave. You can tell it was done separately because I labelled, dated and signed each side. It was only when I opened the sketchbook out before putting it away that I realised the two sides actually married up rather well. If anything, it works better than a more studied effort might have done – would I have been bold enough to leave the large white area in the top left to balance the detail in the opposite corner if taking more conscious control?

Anyway, a pleasing result from what was actually a very interesting evening even apart from my scribbling.