Violas, which includes the flowers given the common name ‘pansies’, are a large family of hardy flowers that often feature in late and early bedding schemes. They come in an abundance of colours but the classic combination, to my eyes, is yellow and purple. Those were the two colours I chose to use in a recent series of watercolour painting experiments – partly because they work together beautifully and, more prosaically, because I had those two colours occupying large slots on my palette and I wanted a creative way to use them up. Here is one of the results (click it to view on Flickr, where you can see its two neighbours): 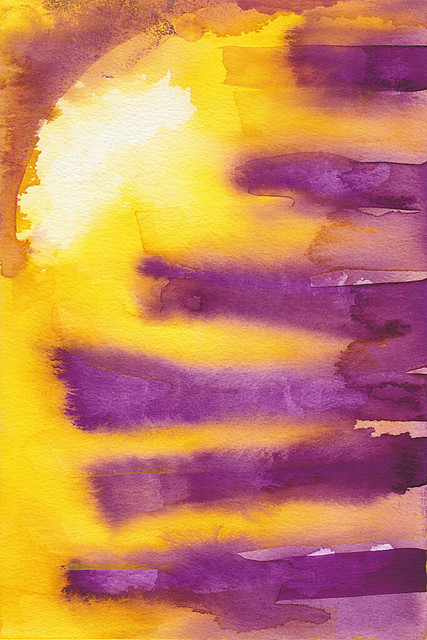 You can see that there is no attempt to echo the form of the flower – even Viola – 1, which is the most, erm, petallic (petally, apparently based on petal shapes) is simply a joyous exploration of how the two colours can be encouraged to flow, merge and influence each other. Both are warm colours in their category and so, although technically opposites on the colour wheel, they tend to create mixes between orange and sepia rather than neutralising to a gray. A cold, lemon yellow would have a different effect; I do have some of the purple left so perhaps that should be my next experiment?

The paintings were scanned in on my Canon TS8050, a multifunction inkjet device which is proving very useful. I then used The GIMP to crop and resize the images and to apply a little sharpening. I used the unsharp mask function on fairly restrained settings over a duplicate layer and then toned it down further by reducing the opacity of that layer to about 25%. This has worked well to suggest the textures you can observe in the original pieces without loosing the fluidity that is characteristic of the medium. I particularly wanted to preserve that because the destiny of Viola – 2 and Viola – 3, painted back to back on the same piece of paper, is probably to be sliced up and laminated into a set of bookmarks; always the intention and probably what encouraged me to paint loosely and freely in the first place.