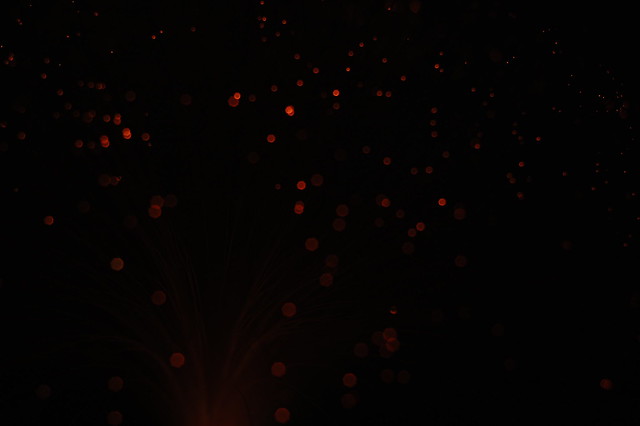 A long time ago in a galaxy far, far away (assuming the Milky Way has displaced itself by a suitably cosmic sounding distance) I took some photos of one of our long-standing Christmas ornaments: a ‘UFO’ sprouting a crest of fibre optic lights. This was with my previous camera, a Fujifilm FinePix, and I had to mess around with making it function in macro mode in order to get a slow enough shutter speed to create the kind of effect I was after. It was a few weeks before I got my current DSLR, a Nikon D40, for Christmas and I’ve long intended to return to the subject. Therefore, perhaps it is fitting that this is what I’ve landed on for photograph 52 of my 52photos project.

I spent quite a while earlier this week trying different approaches and I’ve kept a set while discarding quite a few more. This was actually the first of my photos and used a wide open aperture (f/2). I tried a range of other settings and perhaps should have got my tripod out for the slower shutter speeds but I particularly liked this one. It is more of a study in bokeh (making the most of the shapes formed by out of focus blobs of light) than the capturing of motion over time which was my original intention but that’s how it works. Sometimes you are glad you took lots of shots because the very last one comes out best; sometimes, as here, you could have just pressed the shutter once and walked away – although you wouldn’t know if you might have done better.

Anyway, that is a new photo a week for 52 weeks in 2017. You can click the image above to view the full set and also explore from that image on Flickr to see the other photos I took as I returned to the UFO.