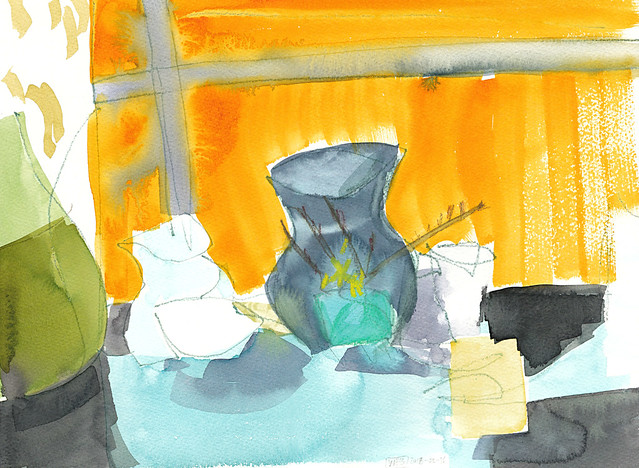 That is the first painting of the afternoon from Friday’s Observation to Abstraction session. If you saw yesterday’s sketches, you’ll see that I was working from the same position in the room. Now we had a palette of watercolours to play with; in this one, I sketched blind, painted freely and then finished off with a little more sketching (including water-soluble crayons for the yellow flowers in the centre).

Our palette had five different colours – green gold, helio turquoise, indigo, indian yellow and permanent rose. All feature here, almost none unmixed and some, like the rose, not instantly obvious. I found it a harder palette to work with than last month’s selection but I wrestled some interesting tones out of it. I got a good match on some of the items, like the green vase on the left but had to take liberties with others (some kind of ultramarine would have been perfect for the vase behind the flowers, which was much brighter than I could manage to conjure up).

This was quite a large picture so I had to scan it in two halves but I think I’ve managed to get the join fairly seamless, thanks to the ‘difference’ mode available on The Gimp. That lets you overlay one image above another and adjust until the image goes as dark as possible indicating minimal difference and the best possible alignment. It also means the composite result is quite a large image so you can look at it in detail on Flickr and see the details of how the paint and other pigments have interacted on the surface of the paper.