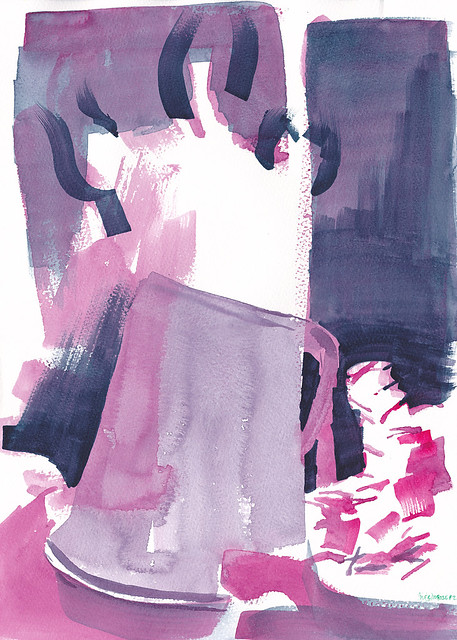 In my second painting from the Observation to Abstraction session, I was using the same limited palette of Pthalo Green and Permanent Rose but the result is quite different.

There is still an element of cartoon but it has pushed another step or two towards abstraction. You might still make out the central shape as a jug of tulips because of the strokes I’ve put in to indicate the boundaries of some of the flowers but I haven’t even attempted to work out the interactions of leaves and stems. It was never going to look realistic and it would clutter the image; I think I gain more, compositionally, from the large white space to draw the eye. Meanwhile, the succulent to the right has been indicated by marks responding to the negative space between the leaves.

The other shift is in the use of the palette. The green isn’t very evident – it would be even less so if I hadn’t signed the work in green pen. However, it plays a vital role in creating all the other colours apart from the few touches of straight Permanent Rose towards the bottom right. Purple, grey, black? All done by mixing. The previous painting used a complementary colour scheme, working on a line between opposite sides of the colour wheel but this one just uses the half of the line that lies on the pink side so it doesn’t even stretch as far as an analogous  palette. Plenty of contrast through!

For more on colour theory, see this simple summary from Tiger Color and the wonderful colourmetric diagram Schmincke produced to illustrate their Horadam Aquarell range.