This weekend, with glorious weather that wouldn’t be amiss in the heights of summer, Jane and I have been doing some work in the garden. My particular task was creating a border to redefine two of our raised beds into a single, larger area in a different orientation. Here is the completed piece: 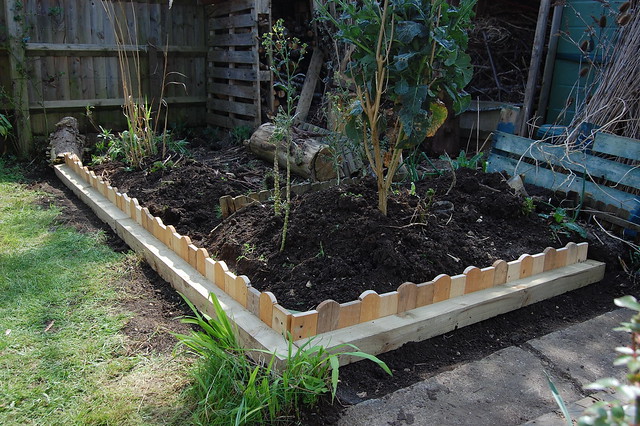 We had the wood up in the loft – some large beams with preservative and some palings with curved tops. Nothing is ever entirely simple though. Not only were the palings far too long but there weren’t enough of them. That led to sawing – easy for the flat bits but a bit more involved for creating enough rounded tops. I alternated the two for a neat, castellated effect.

I also needed a way to secure it in the ground. This morning, I woke up with the bright idea of using some of the left over bits of wood to make longer pieces going down with triangle cuts on the end. After fastening all the bits to beams, carefully ordering them and using up the rest of my decking screws and quite a few old nails to achieve that. It took a while to install, as we tried to get it very level but I think the job is a good one. Yes, it does only have two sides but it is building into an existing slope up to my firewood processing area and, as we level out the soil, that will neaten up.

As an aside, I also noticed when uploading my images that Flickr has now been acquired by SmugMug. I have been cautious about the future of Flickr while it had been under Yahoo’s care so I hope this change, which was news to me, will turn out to be positive.