Today is June 1st… and thus the first day of the #30x30DirectWatercolor2018 challenge I mentioned earlier in the week. I’m not wild about my first piece but at least it is a start: 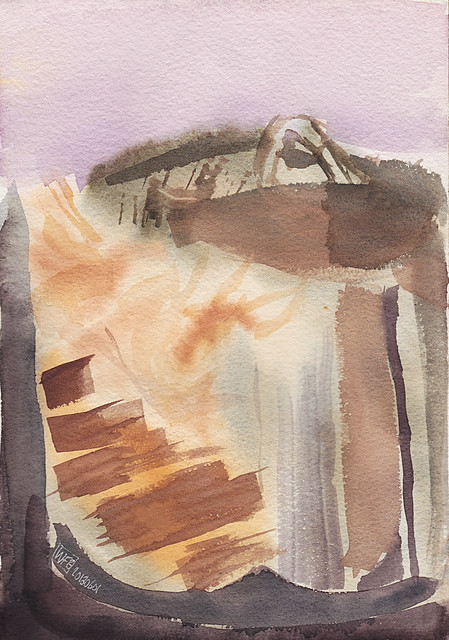 Mashing in the Brew Pot

I mainly used colours that were already on my palette – a cheap yellow ochre and burnt umber (Royal and Langnickel – pigments not specified) along with Schmincke Neutral Tint (PR122, PB60, PBk7) and a grey mixed from Sennelier Ultramarine Deep (PB29)  and Chinese Orange (PY150, PR209, PBr23). There was a purple as well, which I can’t remember the source of, and I used some colours left over from previous mixes. I did no underdrawing for this – it had one layer where I floated colours onto wet paper to create basic shapes and then a layer of overpainting once that had dried properly. However, with having to stop and stir and adjust the temperature from time to time, the appearance shifted a couple of times during the painting. Nonetheless, it got the paints out – it is the first time I have used my watercolour tubes since the end of March so I’ll need a painting or two to get back in the swing.

It is also the birth of another batch of homebrew, which I’ve christened Painted Summer and which I’ll get fermenting tomorrow morning. I probably won’t try and paint the process though.