For today’s 30x30DirectWatercolor2018 painting, I’ve gone for an abstract reworking of an old photo of mine: 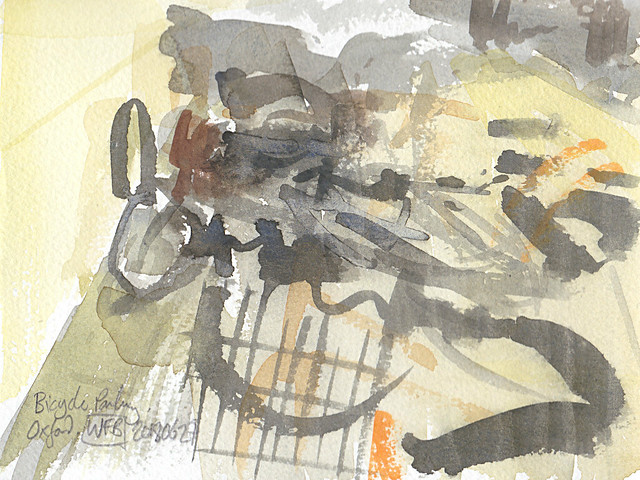 The original image was taken at Carfax in Oxford at the start of Queens Street not long after I first moved to the city. As I recall, I’d just bought a bicycle and cycled down to town to discover that finding a spot to park could be tricky. Oxford has lots of cycle racks but even more bicycles, some of which are in use and some of which probably got left there by last year’s students or further back still. The photo came to mind as I was unlocking my bike at work this afternoon. I keep it in a locked cycle store and I spotted that several of the bikes in there had letters attached, giving a month’s notice of planned removal. Given that the store is often crowded (although not as much as central Oxford), it gets my thumbs up.

Most of this painting was done trying to look harder at the photo than what I was painting. It wasn’t a purely blinded exercise but, although I looked down from time to time, I resisted the urge to worry about accurate representation; this one is all about the experience of chaotic, cluttered parking.

I’m most pleased with the shadows on the left side and also by the wash that comes in from the right. I rotated the paper so I was running the wash down the page with that side on top and the fact the underpainting wasn’t completely dry gives some interesting effects where parts of it have lifted out, adding texture to the piece.