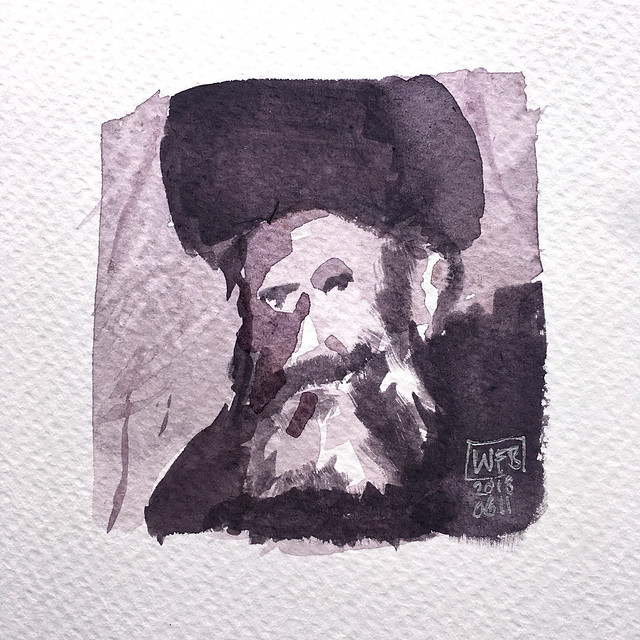 The painting isn’t part of my book review but I needed to get both done. For the 30x30DirectWatercolor2018 challenge, I worked up a small painting of the Rabbi, using one of the photos from the cover of the book as reference. I used the ‘dark’ well on my palette, where I collect leftover paint from dark mixes. Here it was quite purple but this piece used the last of it up so my next mixed black might have a very different character. I started with the light colour, reserving a few patches of white, then the dark and then the midtones before going back for some touching up – you can see where the right of the hat was wrong and got enlarged at this step. The background to the original looked like foliage so I lifted some paint out with a damp brush and then dropped in indications of the branches I could see. And, now to the book review…

Before reading The Spiritual Revolution of Rav Kook by Ari Ze’ev Schwartz, I don’t think I’d heard of Kook. He was a Jewish rabbi in the late 19th and early 20th century (1865 – 1935), who was a leading figure of religious zionism and represented a mystical approach to Judaism. However, Schwartz’s book is more of a reader than a biography; I came away having read lots of passages taken from Kook’s writings and a few explanatory notes but still with only a shaky understanding of how to fit him into historical and theological contexts.

This is a failing on my part but also indicates a weakness of the book. If you had a firmer starting point, I can see that it might be very useful. I’ve used such books in the past on other subjects and, when you have a general understanding, they are excellent for suggesting areas where it might be worth digging further. However, it doesn’t work as a primer on its subject; if you don’t know something about Rav Kook, perhaps start elsewhere.

There should be other ways in. For example, a student of modern mysticism might hope to find some toe-holds. Alas, the book lacks any kind of index. When I was partway through I wondered what Kook said about Jesus, who I do know somewhat more about, but turning to the back didn’t give me any tools to help. Reading on, I found a couple of pages relating to Jesus and Christianity but I think this is an objective lack in a book that must surely expect to often be used as a reference.

Disappointing, although I was at least quite pleased with the resulting painting!