I’ve had a productive week at the Oxford Summer School, doing Jane Strother’s Composition and Colour for Painters course. Five days, five full paintings, most of which I’ll probably give some wall time to at home, a good handful of further sketches and studies and a head full of ideas.

Today I worked on just one piece: 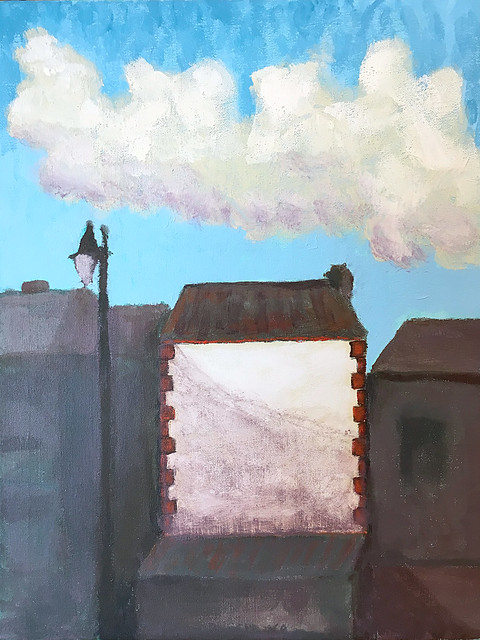 Below you can see the original sketch I did earlier this year and also the version I worked up yesterday to figure out how to fit the square drawing onto a rectangular canvas (I ended up ignoring the construction marks, painting the central square first and then working out from that): 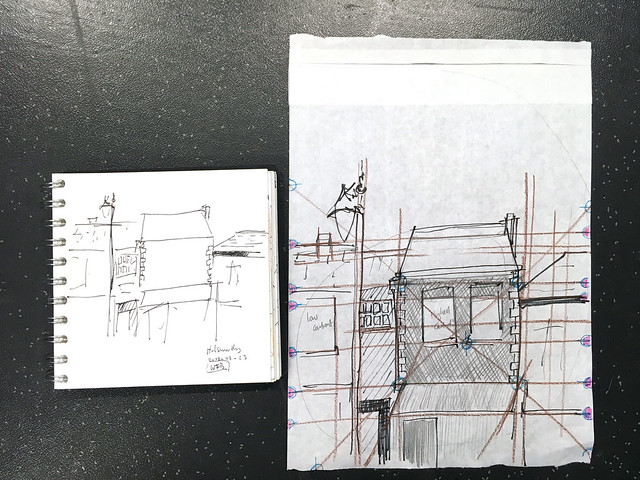 You’ll see that the original sketch was incomplete and that I added a couple of windows to fill the blank square. Checking the approximate location (the centre of Holsworthy, Devon) on Google Streetview (although about 5′ lower, 10′ further back and 9 years later than the picture currently showing), I see my visual memory was quite good and my guess was about right. However, when using my iPad to work on colour ideas this morning, it stuck me that a blank facade felt more true to the sketch. If you look at the date on the original sketch, you will see it was from late February and, in fact, the day after my father had passed away. The reason the drawing was unfinished was that I was grabbing a couple of minutes to put pen to paper but, when time was up, there were more important things to attend to.

The critical point in the piece came this afternoon. The bare white square was too stark so I painted and folded a piece of paper to stick on to test an idea for a shadow. Serendipitously, the sun was shining brightly and, as I moved it into position, I saw a more curved shadow following the line you see. I used a dull purple glaze to paint it in and to mute down the surrounding buildings further. As the only significant curve in the lower half, it echoes the cloud that floats freely and glows at the top.

The final result resembles Holsworthy even less than the original drawing. Instead, it turned out to be more of an essay on bereavement than I had realised when I first planned it. The painting, created with my paints but mainly inherited tools, is also a declaration of hope. In the words of one of the poignant bluegrass hymns we chose for the memorial service: